Besha is a Sanskrit word, which means dress, costume or attire. Everyday from the ‘Mangala Alati’ till ‘Ratri Pahuda’, the deities on the ‘Ratnavedi’ of Shree Jagannath Temple, Puri are adorned with cotton and silken fabrics, gold ornaments studded with precious stones, flowers of several kinds and other leaves and herbs like Tulasi, Dayana, Marua etc. Sandal paste, camphor and at times precious musk are being used in the daily and periodical rituals. 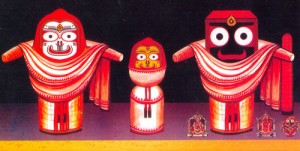 Abakasha means the brushing of teeth and bathing rituals of the deities. This Besha is done everyday immediately after Mangala Alati. The clothes, which are worn by the Deities for this purpose are known as ‘Tadapa’ and ‘Uttariya’

Everyday the three deities are dressed with following types of coloured Baralagi Pata (silken cloths) from Sunday to Saturday. The colour represents the colour of the planets.

The most important decoration of the day is the Bada Singhara Besha. It is done   very night before the Ratri Pahuda (last ritual). Bada leaves. The deities wear silken clothes called ‘Khandua’. An extract from the famous Sanskrit verses of ‘Gita Govinda’ composed by the renowned   poet Jayadeva is woven in the ‘Khandua’ clothes. The head is covered with a cloth called Srikapada (cloth for the head). They are adorned with Karapallava (hands). Padaka (circular lotus like decoration with flowers). This is a very attractive Besha and that till the following morning Mangala Alati is offered to the deities they remain attired in this besha. Seeing the deities in this beautiful decoration is believed to be very auspicious.

Since ‘Bada Singhara-costume’ is associated with the bed time and relates to sleep& slumber the deities are served with all cool ingredients. Sleep does not come easily without coolness of the body. That is why sandal wood paste is smeared on the holy bodies of the three deities.

Singhara Besha is usually made up of different types of floral ornaments & Gita Govinda Khandua Pata (silken clothes set). Deities are decorated with floral ornaments like Adhara, Jhumpa, Chandrika, Tilaka, Hruda Padaka, Kara Pallav, Guna, Gava and a number of garlands; some of these are inter-mixed with Tulsi.

The word ‘Chandana’ means sandal wood, the sweet-scented paste of which is smeared on the divine body of the deities in the month of Baishakha and Jyeshtha, spreading over

42 days during Chandana Yatra beginning from

The annual cycle of festivals of Shree Jagannath Temple begins with the Snana Yatra (the bathing ceremony) which takes place on the full-moon day of Jyeshtha (May-June). Gajanana or Hati Besha is done on the occasion of Snana Yatra.

On the Snana Purnima day, the deities are taken out to the Snana Vedi (the bathing platform). After the ceremonial bath, the deities are dressed like Gajanana which is locally known as Hati Besha. Since it is a general practice among the Hindus that Lord Ganesh is worshipped at the beginning of every religious rite, Lord Shri Jagannatha is decorated as Ganesh during His first annual Yatra. It is also stated that He is dressed as Ganesh to satisfy the followers of the Ganapatya sect.

According to Dardhyata Bhakti, one Ganapati Bhatta, a devotee of Ganesh, who had come from Karnataka, was disappointed not to see the Ganapati image on the bathing platform. To satisfy the religious sentiment of this devotee, to the surprise of all the assembled, the Lord appeared with the mask of pachyderm. Since that day, the Gajanana or Hati Besha of the deities is being donned on the day of Jyeshtha Purnima.

This Besha is chiefly conducted by the Palia Puspalak, Khuntia, Mekap & Daitapatis on this day. Lord Shree Jagannath and Balabhadra assume Gajanana Besha. The Raghav Das Matha and Gopaltirtha Matha respectively supply the above Besha materials as per prolonged tradition.

Pilgrims and general public are allowed to go upto the limits of Snana Mandap to have a Darshan of attractive Gajanana Besha of the deities without paying any fee during ‘Sahana Mela’ period.

Any Saturday or Wednesday between the new moon day of the month of Magha and Basanta Panchami is chosen for the Padma Besha. It is made during the ‘Bada Singhara’ ritual at night and the deities remain with the Besha throughout the night. This Besha takes place to perpetuate the legendary memory of a devotee, who had brought the lotus flowers from a very long distance to decorate the God. 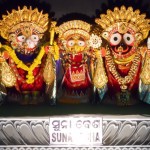 The famous Suna (gold) Besha takes place on Asadha Sukla Ekadasi Tithi (the 11th day of the bright fortnight in Asadha) when the deities are in Their respective chariots in front of the Lions Gate of Shree Jagannatha Temple on their return journey from Car Festival. This Besha is also known as ‘Bada Tadhau Besha’. The deities are decorated with various types of gold ornaments like gold diadems, hands and feet made of gold. Lord Shree Jagannath holds a gold Chakra (disc) in His right hand and a silver conch

in the left hand. Lord Shree Balabhadra wields a golden plough in His left hand, a gold mace in His right hand. This Besha is also done on the Tithis like Vijaya Dasami (Dasahara), Kartika Purnima, Dola Purnima and Pousa Purnima (Pushyabhiseka). The Palia Puspalak, Bhitarchha Mohapatra, Talichha Mohapatra, Daitapatis, Khuntia and Mekap Sevaks are involved to decorate this gorgeously Besha on the chariots. Lakhs of devotees irrespective of caste, creed and religion have a chance for darshan of the above Besha on the chariots during evening hours.fortnight in Bhadraba). In this Besha Shree Jagannatha & Shree Balabhadra are dressed like Lord Krushna

& Lord Balaram. This Besha attests the deep impact of Krushna cult in the Shri Jagannath Temple. Previously a Besha known as ‘Giri Gobardhana’ was done in the Temple by the famous Bada Odia Matha. For some reason this Besha has been discontinued and Krushna Balaram Besha is introduced in its place. One Zamindar of Choudhury Bazaar, Cuttack has provided the entire cost of the above Besha materials.

On Bhadraba Sukla Dwadasi Tithi (the 12th day of the bright fortnight in Bhadraba), Shri Jagannatha is dressed as like Bamana the incarnation of Bishnu. Notably, Baman is the fifth incarnation of Lord Bishnu. According to the Puranic story, Bishnu had appeared in the from of a Bamana (dwarf) and through his ingenuity, outwitted the famous demon king Bali and pushed him down to the subterranean with his foot.

During the time span of the Radha- Damodar Besha of Shree Jagannatha on each Monday, Harihara Besha of Lord Shree Balabhadra is done for a fortnight, i.e. from the darkmoon day till the fullmoon day. In this Besha, half of the body of Balabhadra looks blackish while the other half looks whitish, which connotes that one half of His body is Bishnu and the other half is Siba (Hara).

This besha is also known as ‘Thiakia Besha’. It is done on the 11th day of the bright fortnight of Karttika. It is stated that the worship of Lakshmi and Narayana has gained popularity in Jagannatha consciousness, since the visit of Ramanuja, the great religious preacher to this holy land of Shreekshetra Puri.

It is done on Karttika Sukla Dwadasi Tithi (the 12th day of the bright fortnight in Karttika). This is similar to that of Lakshmi-Narayan Besha with addition of golden headgear.

This Besha is also known as ‘Tribikram Besha’. It is done on Karttika Sukla Trayodasi (the 13th day of the bright fortnight in Karttika).

This Besha is done on Karttika Sukla Chaturdasi tithi (the 14th day of the bright fortnight of Karttika). This is also known as Lakshmi- Nrushingha Besha. The very name of the decoration indicates that the powerful cult of Nrusimha was given due recognition and importance in Shree Jagannatha Temple, Puri.

5 in the month of Karttika. On that occasion Shree Jagannath and Shree Balabhadra are dressed like Nagarjuna (a military general) on this extra day.

In the recent past this Besha solemnized on

This Besha takes place on Karttika Purnima Tithi (fullmoon day of Karttika). Large numbers of devotees are allowed to go up to Ratnasinghasan and have a darshan of the above gorgeous Besha of the Lords and be blessed themselves.