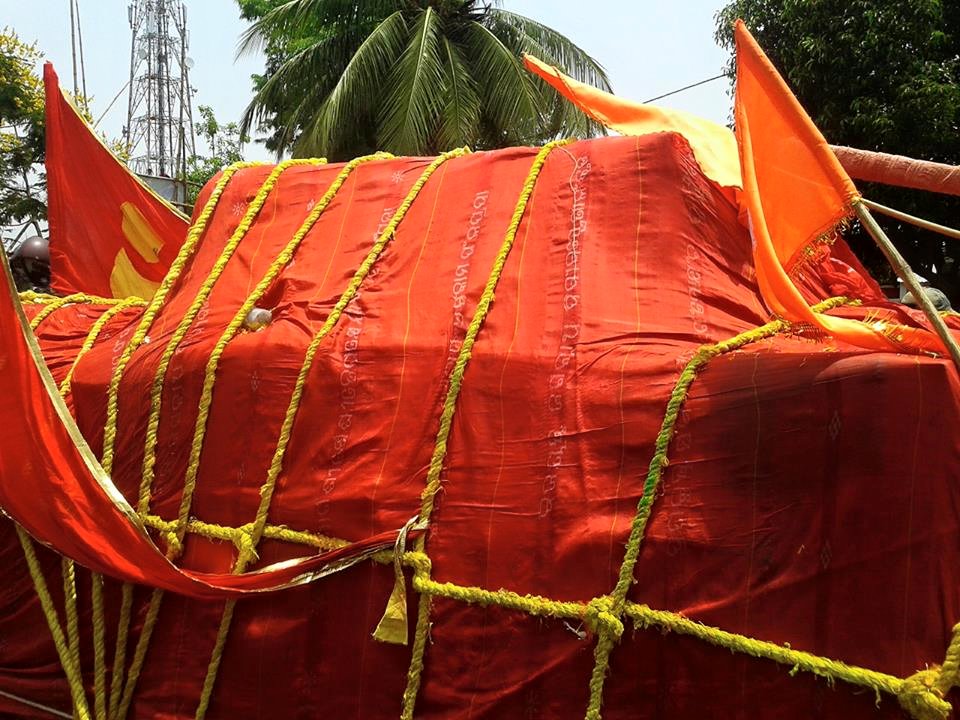 The long process of Nabakalebara of Lord Jagannath got underway at the Sri Nahar (King’s Palace) in Odisha’s holy town of Puri with the completion of the gua teka ritual this morning.

According to sources in the Shree Jagannath Temple Administration (SJTA), the agyanmala bije ritual will take place at 3.30 pm, followed by shaddhibandha of the Daitapatis at 5 pm and the start of Banajaga Yatra, the first act in the elaborate process called Nabakalebara, at 5.10 pm.

The Puri Shree Jagannath Temple administration approved an annual budget of Rs 239 crore for 2015-16. Of this, Rs 21 crore would be spent exclusively for the Nabakalebar festival, the process for which would begin on March 29.

The temple management committee meeting, which was held under the chairmanship of Puri King Gajapati Dibyasingha Deb, decided that it would spend around Rs 11.84 crore for the servitors’ welfare and Rs 25.25 crore towards establishment expenses, including salaries of its employees. It would spend Rs 63.45 crore for taking up various infrastructure development works, including the development of roads around the temple.

Odisha State Dept of Culture has proposed to bring out a commemorative stamp/Spl cover on Nabakalebara by India Posts.

The Odisha government is working on a robust disaster management plan to deal with possible problems during Nabakalebara festival in Puri in July.

A temporary shed is constructed almost in the middle of Koili Baikuntha inside the temple premises near the burial ground /Samadhi pitha of the Lords. All arrangements will be made for the purpose accordingly by the temple administration.

To ensure uninterrupted power supply in Puri during July Nabakalebara, the energy department has chalked out a comprehensive plan, entailing Rs 300 crore.

Chief Minister Naveen Patnaik has put four senior officials in charge to supervise the work and ensure completion in time.

The chief secretary Gokul Chandra Pati on Thursday reviewed the progress of Nabakalebara infrastructure development, including the railway projects in Puri. Pati expressed displeasure over the tardy pace of work in the expansion of Puri station and doubling of tracks. He said the railway authorities promised him to expedite the work and complete the projects much before the July Nabakalebara.

Legal hurdles have delayed procurement of two essential ingredients, sandalwood and musk used while replacing images of the deities of Lord Jagannath, Lord Balabhadra and Devi Subhadra with new

ones during the Nabakalebara festival to be held this year at the Shree Jagannath temple in Odisha’s pilgrim town Puri.

The Odisha government unveiled a new logo for the Nabakalebara festival scheduled in June this year in Puri.

Odisha govt stresses sanitation in Puri ahead of Nabakalebara. The officials have been asked to expedite road connectivity projects within the stipulated time: Mangalaghat bypass by March, Sterling bypass by May, widening of Atharnala road by April, Malatipatapur-Balukhanda road and Pipili-Konark road by April, and Puri-Satapada road by March and completion of parking slots by April.

The State Government on Friday demanded financial assistance of `740 crore from the Centre for Nabakalebara in July, 2015.

The State Government has decided to create temporary accommodation for one lakh pilgrims at Puri during the Nabakalebara celebration in July, 2015.

The temporary accommodation will be of two categories. One will be provided free of cost to the pilgrims. The second type will be available at a cheaper cost than the prevailing market rate.

The accommodations will be set up in vacant places of hotels and lodgings.

Repair work of Jagannath temple and other temples inside its premises has reached the final stage. Repair work of Jagamohan will be completed by March, 2015. It was decided that old and unsafe buildings around the main temple will be identified and demolished.

Official sources said 17 parking places will be set up at different places in the town for the occasion.

Nabakalebara Panel Reviews Infra Works. Officials informed that double tracking of the 18-km railway track between Sakhigopal and Puri has been put on fast track and is expected to be completed by May next year.