Jagannath Temple, Puri Jagannath Temple is one of the most renowned as well as the biggest temples of Orissa. Established in the 12th century, the temple is dedicated to Lord Jagannath (Lord Krishna), Lord of the Universe. The credit for laying the foundation of the Jagannath temple of Puri goes to Raja Ananta Varman Chodaganga Dev. The temple is located at a distance of 60 km from Bhubaneswar, on the coast of Bay of Bengal, and is greatly revered by the devotees following the Vaishnava traditions. 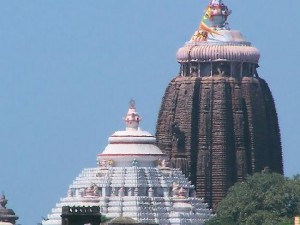 The Puri temple is built on a gigantic raised platform in the heart of the city, The temple complex is enclosed by a wall about seven meters high including the height of the platform. The area of this platform is more than 4,20,000 sq.ft. The wall is pierced by four gates ,facing the four directions. On the east-facing gate, there are ston e images of two lions and it is called the Lions Gate. The north, south and west facing gates are similarly known as the Elephant Gate, the Horse Gate and the Tiger Gate (also called the Khanja Gate) respectively. The north gate is mainly meant for the God himself in as much as, the logs of wood out of which, the images are fabricated, make their entry into the temple premises through this gate, when the Navakelevara ceremony takes place. The east-facing Lions Gate is the main gate. There are pyramidal structures over the four gates, which are not very old.

There is an interesting legend associated with the Jagannath temple of Puri. It is said that King Indradyumna, the ruler of the territory, saw Lord Jagannath in his dreams and following the Lord’s wishes, as told to him in his dreams, he got the Jagannath Temple constructed. Situated in the heart of the holy city, it exudes splendour and the tall spires lend it a magnificent aura. The walls are embellished with exquisite carvings.

The pillars that provide support to the temple are adorned with pictures depicting the life of Lord Krishna. In the list of the most splendid monuments of Orissa, Jagannath temple occupies a supreme position. The temple’s kitchen is considered as the large st kitchen in the world. Tradition maintains that all food cooked in the temple kitchens are supervised by the Goddess Mahalakshmi , the empress of Sri mandir herself.

All food is cooked following rules as prescribed by Hindu religious texts; the food cooked is pure vegetarian without using onions and garlic. Cooking is done only in earthen pots with water drawn from two special wells near the kitchen called Ganga and Yamuna.

One of the most popular attractions of the Jagannatha Temple of Puri comprises of its Rath Yatra that is organized every year. It is basically a chariot festival, where idols of Lord Jagannath, Lord Balabhadra and Goddess Subhadra, the main deities of Srimandir, are taken to the Gundicha temple in bejewelled chariots and a re brought back to the mandir in the same way.

People from across the world visit the temple throughout the year as it is one of the pilgrimage “Char Dhams” of the Hindus.