“ Nabakalebar” as the word denotes, is the periodic renewal of the of the wooden idols of the four principal images (Chaturda murti) Lord Jagannath, Lodr Balabhadra , Goddess Subhadra and Sudarshan. 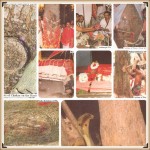 Nabakalebara means the new embodiment. This ceremony resembles the phenomenon of life and death on earth, as has been described by Lord Krishna to Arjuna in Bhagabat Gita.Anybody taking a birth on this Martya loka(Earth) has to leave the same one day on the other which is enevitable. Nabakalebar occurs when the hindu lunar calendar has two ‘Asadhas’; joda asadha, aslo called purusottam masa. This falls in the interval of 19 years or sometimes 8 years or 12 years. During the last century Nabakalebar has taken place in the years 1912, 1931, 1950, 1969, 1977, 1996.

There are two types of Nabakalebar

The very first event of Navakalebar is the search of specific Darus( Neem wood) for the Chaturda murti. The countdown to the Naba Kalebara starts with the formation of the search party that would go out to locate the “Holy Tree”. The following is the lists of Darus collected from the following areas in the following years .

The search party consists of 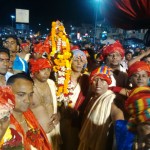 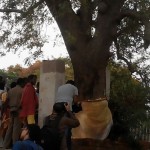 The specific event for searching the Darus also termed as Banayaga Yatra commences on the 10th day of bright fortnight of the month of Chaitra i.e the day following Shri Ram Navami. On this day after the mid-day worship (madhyahna dhupa) Pati mahapatra , the priest, takes out three Ajnamala or the garlands of orders, which are pieces of te read strings tied with nirmalya in the middle. He distribute these garlands to the head of the respective Daitas of the respective images and retains the Ajnamala of Sri Sudarsan with himself.  Then Bitarachha Mahapatra ties sarees of 12 ‘hastas’ in length on the head of the Daitas and that of Pati Mohapatra is a longer one.This function is done near Kalahat door insider the temple. Then Patajoshi Mahapatra ties new clothes on the heads of Lenka Sevayat and four Biswakarma Sevayat(Carepnter). This function starts near Jaya Bijaya door. The traditional trumpet and drums are played. The procession including Daitas, priests , Viswakarma, Lenkas,Karanas, Pati Mohapatra etc starts and goes through sata pahacha via Anand Bazar and comes to lion’s gate. From there they proceed towards the king’s palace. After meeting the King & his Rajguru, the procession goes to Jagannath Ballav Math where the party rests. The next day the journey starts to Kakatpur Mangala for her blessings and guidance. The total group offer prayers for the success of the mission.

The goddess Mangala directs the Daitas, in dream to the places from where the Darus are to be collected.

After the Darus are located , the ritual bath of the tree is completed by sprinkling it with sacrificial water . It is applied with sandal paste and vermillion. Flowers are offered and new cloth is wrapped around the tree. After this, Pati Mohapatra places the Ajnamala of the deity on the respective trees. Yajna is performed in the sacrificial pavilion erected on the western side of the tree. Then follows Ankurropana. Some varieties of seeds are sown for germination. After the seeds germinate, homas are made reciting vedic mantras continuously for two days. Then the axes are worshipped. Pati Mohapatra strike the tree with golden axe, then Viswavasu or Daitapati with silver axe and at last the Viswakarmas with iron axe cuts down the tree. After being cut, the tree must fall only in the northern, eastern or north-eastern direction. A log of about 2.5 meters in length is cut out from the tree trunk and rest of the tree is buried underground at that very spot. The Daru is disbarred and given a quadrangular shape. It is then wrapped up in a silken clothes. During this period the party do not take either food or water. No one is allowed to see the cutting of the Darus as per the Sastras. Then the Darus are transported to Puri by a specially constructed cart made up from the wood of kendu tree. The wheel of the cart are made of vata tree and axle made from tamarind tree. The localities of the places through whiles the cart passes pulls the cart and then Daru reach Puri. After as stoppage at Nrusimha Temple of Gundicha house, the Darus are brought to Koili Baikuntha trhough the northern gate of the Shrimandira. 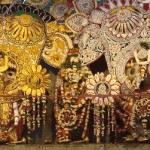 On the full moon day o fthe Jyestha month i.e on snana purnima, the Darus along with the old images are brought to Snana Mandapa for the usual bathing ceremony. After this the old images are taken to Anabasar room. Usually Anabasar is for 15 days. But during Nabakalebar it is for 45 days and termed as Maha Anabasar. The Darus are taken to Nirmana Mandap where the images are carved by Viswakarmas. The temple is closed for public during this period. Only Pati Mohapatras and Daitas are allowed to enter the Mandap. The height of Sudarsana, Balabhadra and Jagannath are each 84 yavas and height of Subhadra Devi is 62.5 yavas . The length of each arm of Balabhadra is 36.75 yavas and the length of side arm is 13.75 yavas and front arm is 23 yavas. The length of each arm of Jagannath is 42 yavas whereas the side arm length is 20 yavas and front arm is 22 yavas. All the images have a cavity of 12 yavas each for keeping the mysterious Brahma padartha, the soul of the lord.

During the construction , yajna is performed . This is also termed as the Pratistha ceremony . After 14 days , the inner shape of the images are ready. These constructed Darus are taken on a chariot to circumambulate 7 round in a Bhittar bedha and there after the Darus are brought back to Koili Baikuntha. On each day of yajna 2100 times offering of ghee with vedic hymns are offered. On the last day the King gives the purnahuti(last offering) and completes the yajna. After this constructed Darus are taken on Pahandi method around the temple three times and then to Anabasar room where the old images are placed. By this time these old images have completed 15 days of Anabasara. On the night of Amabasya , the change of Brahmas takes place. The Brahma tatwa/padartha is brought out in complete darkness by opening the small openings made in old images by the Daitas. After due worship of the Brahmas they are kept in the new bodies of the images respectively with fresh tulsi, sandal paste and certain white scented flowers and there the Brahma kabati, the cavity of the images are closed. The old bodies of the images are carried to Koili Baikuntha and buried. After the cremation of principal images , the 12 horses, 3 sarathis and 36 wooden side images of Rathas are also buried in different places in Koili Baikuntha. All the burials are conducted by Daitas who observe the 10 days rituals i.e the sudhi-kriya performed after the death of the family member in hindus. On the same day , they take   bath for purification and after that on the 12th day , give a feast to the servitors of the temple.

After the change of Brahmas from old images to new Darus , further construction of the bodies of the images starts. During this period, 10 images called Dasa Avatar are worshipped and offered rice Mahaprasad and the Daru brahamas are offered sweet fruits such as ripe jack fruit and ripen mangoes and sweet water mixed with milk cream. The wooden structure is simply considered the skeleton of the images. In the beginning of the dark fortnight of the extra Asadha , these images are entrusted to the care of Datta Mohapatra. They apply different substances and wrap them up with several cloth stripes.

The Niladri Mahodayam gives a detailed description of the annual repairs of the statues of the images. The wooden structure is identified as bones , to represent the marrow inside the bone. Perfumed oil is first rubbed on the wooden structure. Stripes of colored ‘Netra Pata’ are wrapped around every limb of the images which represents vein and the blood flowing into them. The thick paste of camphor , musk and sandal paste applied on the structure symbolizes the flesh of the images. Strong stripes of cotton cloth are then wrapped up , to represent the skin of the images. Then the starch made from wheat flour is applied to strengthen the cloth pieces with the corporal hair, on the 13th day after full moon. This ritual is called Khali lagi.

The lower part of the images are round shaped. It is called Sripayar(lotus feet). To resemble the earth which is composed of many layers and constitutes of latitudes and longitudes, the sripayar of the images is constructed with pata closthes and pata ropes. After this , the color application ceremony starts . Indigenous colors including the conch shell , haritala and hingula are used to color the images. The final touch in painting is given by Brahmin priest of the temple who paint the pupils of the eyes of the images. The images take bath with scented water which is followed by Netrotsava. The public is allowed to have the first Darshan of the new images , which is also termed as Naba Jauban Darshan.   Thus all the rituals of the Nabakalebar comes to an end. Now the images are ready for the procession to Gundicha temple i.e the world famous Rath Yatra or Car festival.